These charts may help to understand the terms that are often used in lawn bowling. 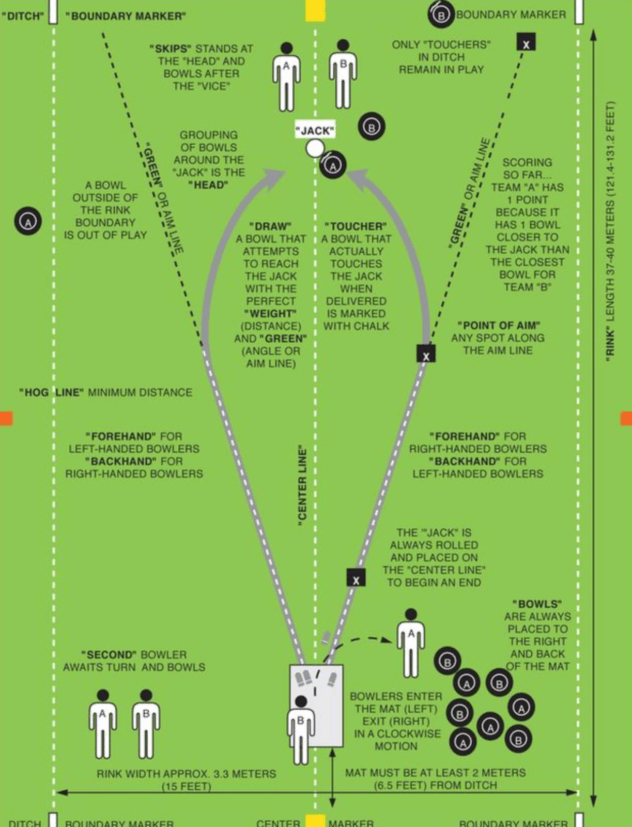 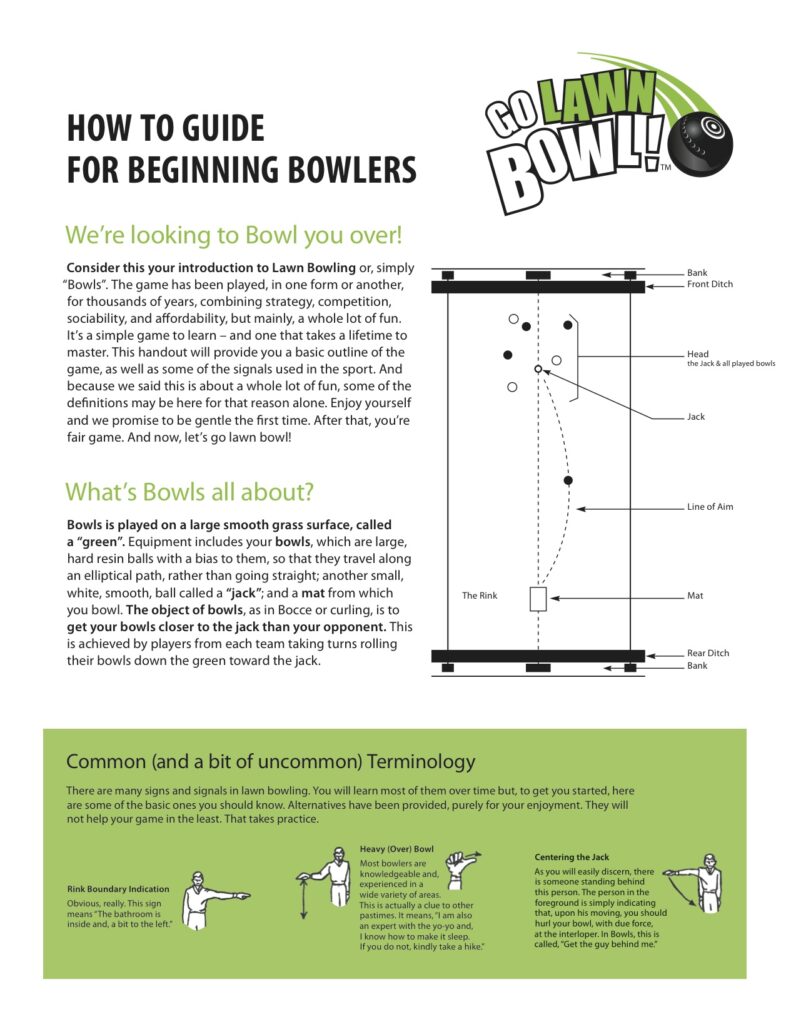 Back Bowl: A bowl that comes to rest beyond the Jack.

Backhand Draw: When the bowl is aimed to the left of the Jack, and curves to the right (for left handed bowlers)

Be Up: Instruction from Skip to bowl longer (don’t be short of Jack).

Bias: Weighted offset to make the bowl curve. The bias side of the bowl is noted by the smaller button. Bias is correct when the bowl curves towards the Jack.

Blocker: A bowl that blocks someone (usually an opponent) from reaching the desired target.

Dead End / Burned End: A Burned or “burnt” End is one where the Jack has been moved outside the boundaries of the rink.  As of 2013,  the rule is there would be no dead ends. If the jack is knocked out of play it will be centered two meters from the front ditch and play will go on.

Draw Shot: Shots where the bowl is rolled to a specific location without causing too much disturbance of bowls already at the Head. (See Hand).

Drive: This involves bowling with considerable force with the aim of knocking either the Jack or a specific bowl(s) out of play.

Dead Bowl: When a bowl either goes in the ditch or rests outside the rink field of play (Lane).

Down: When your team does not have the Shot Bowl, you are considered to be Down. You may be down by one or more points.

End: Means playing of the Jack and all bowls of both opponents in the same direction on a Rink. Bowling to the Jack is called “one end.” The number of Ends played is decided by Club Rules. A typical game has 14 ends in social games, 18 in tournaments.

Foot Fault: A foot fault occurs when the bowler does not have one foot over the mat on release of the bowl. Foot may be on the mat or in the air.

Forehand Draw: When the bowl is aimed to the right of the Jack, and curves to the left (for right-handed bowlers).

Grass: Apart from the surface, the directional line the bowl takes in order for it to curve towards the Jack. So a “too much grass” bowl will be wide.

Green: Lawn bowls is played on a square “Green” of grass, with directions being alternated to protect the grass.

The Hammer: The final bowl of the end. Newer rules allow the winning team on an end to give away the mat and so retain control of the hammer.

Hand: The side on which the bowl is delivered: either Forehand or Backhand.

Head: Rolling bowls toward Jack to build up a Head, which means such bowls that have come to rest within the boundary of the Rink and have not been declared dead.

Hog Line: Special markers (often flags for tournaments) that dictate the minimum line beyond which the jack must be rolled for the end to be valid.

Jack: White ball or “kitty” used as a target to play to, which determines point scoring (see Points).

Lane: All games are played within Lanes that are at least 14 ft. wide. The lanes for a given game or tournament are designated with markers on the edges of the green. This way, multiple games can be played simultaneously on one green. Bowls that come to rest out of their lanes are Dead Bowls and are removed from the end.

Lead: The person who starts off the play. Also places the Mat and rolls the Jack if their team “has the mat”.

Mat: The actual mat that is placed by the team losing the last end, to start the next end. This is also known as having the Mat. The team with the mat always rolls the Jack. Newer rules allow the winning team to give away the mat, thereby losing control of the Jack, but ensuring they have the final bowl of the end (the Hammer).

Measure: When bowls are too close to visually decide which one is closer, it is known as a measure. Players carry special lawn bowls tape measures to do this. The distance is irrelevant so the tapes are only used to see who is closest.

Narrow: Bowler didn’t start out far enough from centreline to the Jack.

Pairs: Bowls games in which each team has a pair of players (a Skip and a Lead)

Points: Whoever gets their bowl(s) closest to Jack at conclusion of an End.

Potato Bowl: A badly thrown (or released) bowl that hops, skips and jumps.

Promoting a Bowl: Pushing up one of your team’s bowls to a better position.

Rink: The lane on the grass court playing surface. Often 15 feet wide from one end to the opposite end. Each Rink is defined by markers on the edge to clearly define the lane.

Rinks bowls: A bowling game in which there are 4 players per team a Skip, a Vice, 2nd Lead and a Lead.. Typically then players only use 2 bowls each.

Skipper: Team captain or Skip who always plays last. This person is usually the most experienced player, who also guides the strategy.

Shot Bowl: The bowl closest to the Jack.

Tie: When the two closest bowls are both exactly the same distance from the jack and belong to opposing teams, even after measurement, the end is declared a tie. (Note: Unlike old conservative English clubs, the men never ever wear ties at our club – not even for Xmas dinner!)

Touchers: Bowls that hit the Jack. These bowls are marked with chalk and remain “alive” even if they are in the ditch.

Trial Ends: Formal practice ends, usually only allowed at the start of a tournament, in which each team rolls 2 bowls down and back to get a feel of the green. Such ends do not count in the scoring.

Triples: A game in which each team has 3 players on their team – a Skip, a Vice and a Lead. Typically each player then only uses 3 bowls each.

Up: When your team does have the Shot Bowl, you are considered to be Up. You may be Up by one or more points.

Vice: The person who plays after the Lead and is responsible for deciding the winner of a head, and recording the results.

Weight: The amount of speed applied in delivering the bowl from the mat to the Jack. “Heavy” weight means that the bowl stops beyond the Jack, while “Light” means that it stops short of the spot desired.

Wide: The bowl is started too far out of the centreline to the Jack (also called taking too much “Grass”).

Wick: When a bowl bounces off another bowl. (This term is derived from curling).

Woods: An old term for bowls.

Yard On: A shot delivered with an extra degree of speed to displace or disturb other bowls in the Head with intent of killing the End. 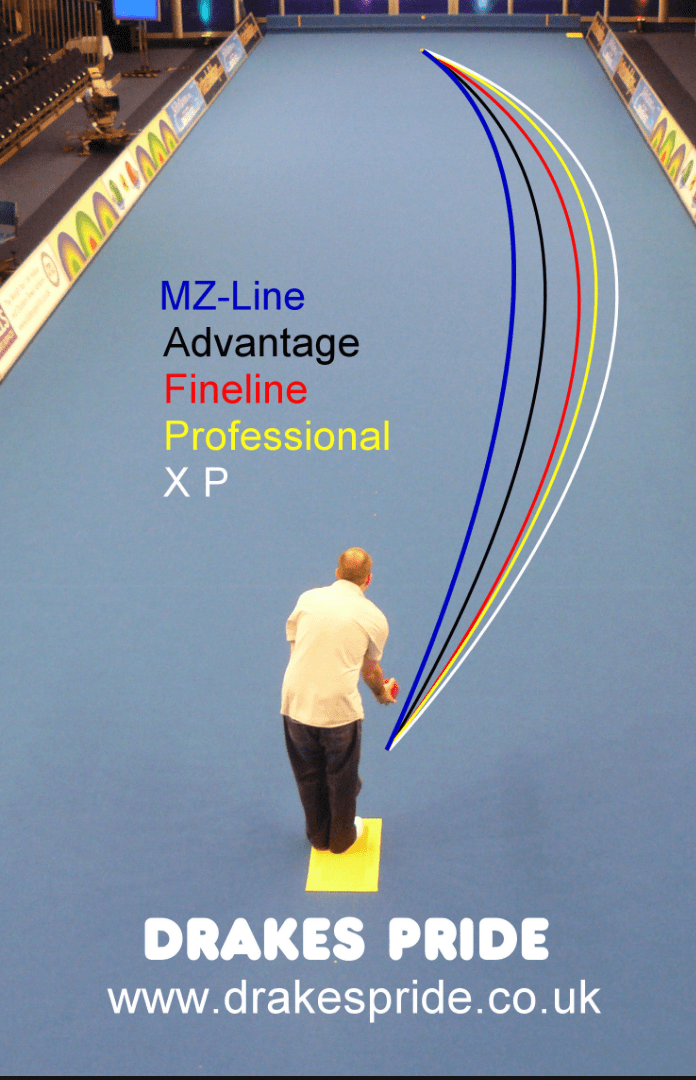 There is a three-ring binder in the bowls room of the clubhouse that shows the bias paths of the various brands of bowls.  The binder also includes other helpful information regarding bowls.

back to first page